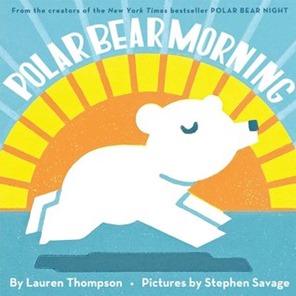 Following the picture book Polar Bear Night, this second book continues the story of the little polar bear cub.  The cub wakes up and peeks out at the day and snow outside her warm den.  As she starts to explore, she discovers another little cub out playing too, sliding down a little snow hill.  The two of them immediately start playing together, running towards the sea and eventually jumping into the icy water side by side.  The two little friends end up together on an ice berg surrounded by family, seals and whales.

Perfect for toddlers, this book speaks to the speed at which small children can find playmates and make friends.  As the two polar cubs run together, they pass different arctic animals like seals, walrus, seagulls and whales.  The text is brief and clearly sets the story in the arctic, the cold, the ice and the warmth of friendship.

Savage once again has amazing illustrations that are filled with chunky shapes, deep textures and shading that makes it stand out.  My favorite page in the book has the two small cubs nose to nose, one with a plop of snow on his head.

A nice morning read aloud, this book be a good fit with bear story times or wintry tales.  Appropriate for ages 1-4.

If You Find Me by Emily Murdoch

Carey’s mother has been gone for over a month, leaving Carey alone with her little sister, Jenessa.  They live in a large woods and sleep in an old camper with no heat.  Her mother had left them before, but usually not this long, just long enough to get more meth.  But this time, their mother was not the one who came to their camp, a man and woman arrive, claiming that the man is Carey’s father.  They take the girls back with them.  Carey and Jenessa have never had a hamburger, never watched TV and never really been cared for.  Carey was the only reason that Nessa had survived at all, often serving as the only love she had.  But now the girls were expected to live with Carey’s father, his wife and their stepsister in their home.  It’s a new life filled with challenges that Carey will only be able to accept if she can see the truth of why her mother took her away and also the truth of what she had been forced to do in the woods.

Murdoch has written a book that has a very compelling premise and happily, she is able to make the book about far more than that first bit ripped from the headlines.  She writes about the power of music to heal, the ability of family and love to make things right again, but also the agony of betrayal, the ferocious power of abuse, and the building danger of lies.  Carey is a heroine who has undergone real tragedy in her life, but here is she far from being a victim.  She is instead immensely resourceful, caring and desperate to do what is right for her little sister.

Murdoch also weaves into so much of the book Carey’s connection with nature.  It is the place she turns when in distress, moving even to the outdoor courtyard at the high school in order to find solace outdoors.  Her love of music in also part of it, having played her music under the open sky for so long.  When Murdoch writes of nature, she is part poet, creating a depth in this novel that lifts it to another level.

This story is one of a tough heroine who has to be strong for both herself and her little sister.  It is a tale of survival but also one of recovery and honesty.  I’d think this one would booktalk extremely well thanks to its strong premise that will nicely tantalize teen readers.  Appropriate for ages 15-18.

Reviewed from digital galley received from Macmillan and Netgalley.