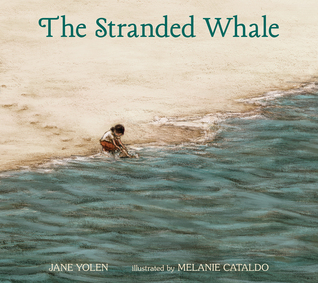 In the fall of 1971, Sally and her brothers were walking home from school along the dunes in Maine. Sally spotted a big gray thing on the beach and realized that it was a stranded whale. The children grab their sweaters and use them to keep the whale wet. One of the brothers ran off to call for help and people from the community arrived with buckets. They tried rocking the whale to get it back to the ocean, but she was too big and they were too weak and small. Sally stayed by the whale’s huge eye, even as it breathed its final breath. The children were seen as heroes for what they did that day, but Sally knew that it would be so much more wonderful to have been able to see the whale return to the ocean.

Yolen writes with such poetry about nature that you are right there and experiencing it alongside Sally and her brothers. Yolen captures the world of the beach in her poems, showing all of the small living things that Sally dashes by on her way to the ocean with her sweater. Most evocative are the scents of the whale, who smells “of fear and deep water” at first. Then the whale last breath:

Such imagery that captures in a subtle way the scent of death too.

Cataldo’s illustrations make sure to keep the scale of the enormous whale consistent from one page to the next. On some pages there is an expanse of grey flesh with one huge eye looking out. The effect is humbling, showing that nature is both bigger than us and also a part of us too. The illustrations are beautifully done, playing light and dark against one another as the whale slowly perishes.

A brave book that does not shy away from grief or wonder. Appropriate for ages 6-9.

2 thoughts on “Review: The Stranded Whale by Jane Yolen”