Chirri and Chirra are two little girls who wake up early and head out into the forest together on their bicycles. They arrive at the forest cafe where there are tables just right for creatures and people of any size. They order cups of acorn coffee and clover blossom tea. Then they are off again into the forest and they find a bakery with bread and jam of all kinds. A bear and rabbit are eating there too. The girls choose their sandwiches and eat them near a pond. They play in the water, nap under a tree. They bicycle farther on and as the sun is setting come to a forest hotel where they find a room and beds just the right size for them. The day ends with the girls joining in a forest concert as everyone sings together.

This is a translation from the Japanese original, and it works very well. The picture book is delightful and airy, inviting children into a world built just for them. The description may seem a bit too sweet and almost saccharine, but the book is not like that. Instead it has an exceptional childlike nature that fills it with wonder and the joy of exploration. There is a feeling that this is entirely imaginary yet that it may also be delightfully real.

Doi’s illustrations are a large part of the appeal of this book. The two girls are matching except for the buttons on their dresses. The illustrations celebrate the different sizes of creatures and also the food and drink that the girls have along the way. Just the acorn coffee and clover tea will have your mouth watering. Expect plenty of tea parties and sandwiches after reading this.

The first in a series, I am hopeful we will see more of them in translation soon. Appropriate for ages 2-4. 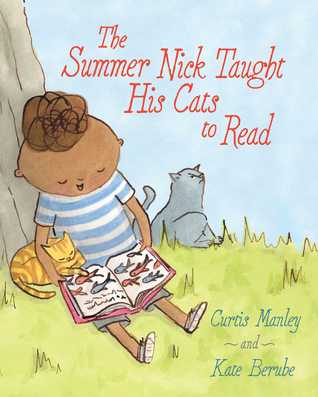 The Summer Nick Taught His Cats to Read by Curtis Manley, illustrated by Kate Berube (InfoSoup)

Nick has two pet cats, Verne and Stevenson. They love doing things together, but the cats don’t appreciate it when Nick sits down to read. So Nick decides to teach them to read too. He starts with easy words, but the cats aren’t interested. He moves on to flash cards and soon Verne is paying attention, particularly when the words and books have to do with fish. Verne sounds out words and starts reading books on his own, he even gets his own library card. Stevenson doesn’t seem interested at all though. Verne and Nick have lots of fun acting out the stories that they are reading, though it would be more fun with Stevenson playing too. Then one day Nick discovers pictures that Stevenson has drawn of a pirate story. Could it be that Stevenson is interested after all?

Manley cleverly shows the process of learning to read in this picture book. Moving from simple words to sounds of letters to looking at books on your own and then reading entirely on your own. Delightfully, he also has Stevenson who is a reluctant reader. Stevenson though just needs someone to notice what he is passionate about and suddenly he too is interested in reading. It’s a smart way to show that we are all readers, some of us just need to not read about fish but about pirates!

The illustrations by Berube are friendly and fun. I love that Nick is a child of color and that it is not an “issue” in the book or even mentioned. One special part of the book is Stevenson’s expressions which are pure grumpiness and then can be seen later in the book as purely piratical.

A summery book about reading that will move nicely into the school year. Appropriate for ages 4-6.