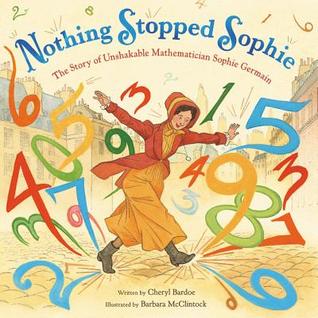 Sophie loved math from the time she was a small girl. Her parents had to take away her candles and her warm dresses to keep her in bed at night and not at work at her desk. But nothing stopped her, not even the French Revolution when she  was growing up. There were no opportunities for Sophie to study in a university, so she did her homework by mail using a male name. Her work was extraordinary, but when her identity was discovered no mathematicians would return her letters, though she became very popular at dinner parties due to her reputation. In her thirties, Sophie discovered a mathematical problem that would become her focus for many years. A challenge was set to figure out the mathematics behind vibrations and the patterns they made. Years later, Sophie was the only one to submit a solution which she then worked to perfect for additional years. This time though, she worked under her own name.

Bardoe has written a lovely biography of a fascinating woman who demonstrated that women are just as good at mathematics as men are. Her math has a blend of science and math with its focus on vibrations, making it all the more complex. The book shows again and again the resilience and determination that it took for Sophie to succeed. The writing is accessible and celebratory in tone. McClintock’s illustrations incorporate collage in a subtle but profound way. She also uses numbers and formulas in the art itself, creating scenes from a scaffold of digits and action from vibration patterns.

A great picture book biography about an inspiring woman. Appropriate for ages 7-9.