Rashin tells a story from her own childhood when she traveled for the first time to an American beach. She remembers beach trips when her family used to live in Iran. They took a car, stopping for a picnic lunch along the way. In America, the subway will take them to Coney Island. In Iran, there were strict beach rules. Women and girls swam separately from the men and boys. Her favorite memory was a day when little boys peeped into the women’s section and the ensuing chaos. In America, even the ice cream flavors are different, but Rashin may have discovered a new favorite with the help of another little girl. At Coney Island, the rules at the beach are less clear, but a new friend is quickly made.

The interplay between the two cultures is lovingly depicted, neither better or worse, just very different from one another. There are universal joys like cold ice cream, sand and waves. At the same time, the two beaches and cultures are shown with their own personality and uniqueness. The illustrations add to the sense of joy with their bright colors and smiling people. While the focus is not on religion, it is an inherent part of the illustrations and the story.

A grand example of why diverse books are so important, this book tells the author’s own story. Appropriate for ages 3-5. 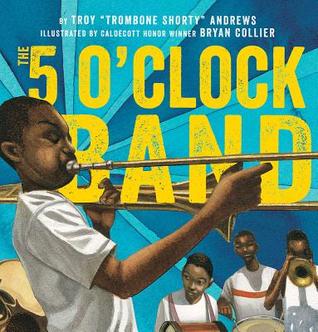 This second picture book by Andrews takes the reader on a trip through New Orleans. Shorty and his friends had formed a band. They called themselves the 5 O’Clock Band because that’s when they gathered to play. One day, Shorty got so caught up in his music that he missed the meeting time of the band. He tried to catch up with them, bringing the reader along on his walk past New Orleans landmarks and meeting musicians on the streets. Shorty longs to be a great bandleader and as he looks for his band, he learns lessons about being a leader along the way.

Filled with a deep love for the city of New Orleans, this picture book continues the story of Trombone Shorty’s childhood. Andrews’ writing is deft and musical, using repetition and rhythm to great effect. The illustrations by master Collier are lush and beautiful. They depict the richness of New Orleans on the page, filled with yellows and greens.

A jazzy picture book that inspires. Appropriate for ages 6-9.