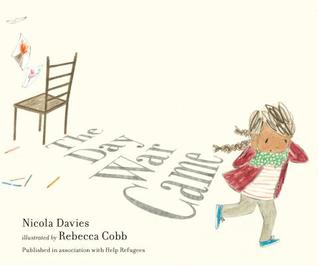 A little girl explains what happened to her when war came to her city. She started the day with breakfast, kisses, and flowers on the windowsill. Then war came while she was at school. Her town was turned to rubble and she fled with others. She lost her entire family and her home in one moment of war. She made the dangerous journey to another country alone, arriving on a sandy shore. Even in the new country though, she was not accepted. War was there too in the way the people looked at her and made her unwelcome. When she tried to go to school, she was told there wasn’t a chair available for her. It is not until the children of the community come together with chairs in hand to make her welcome that war finally begins to recede.

There are very few picture books that can make me truly weep. This was one of those. The poem by Davies is powerful and starkly honest. She has taken inspiration from several true events and turned it into a tale of the loss and continued rejection that refugees feel even after making it to safer countries. The power of children to make the world welcoming to those who have fled their countries is empowering and refreshing to see on the page.

The illustrations from Cobb take readers on a journey from the brightness of the little girl’s family life before war came to the devastation and darkness of being a refugee. The brightness does not return until the girl sees a classroom again, only to be pushed away and back to the darkness she lives in. This is a tangible look at the impact of war and the transformative power of community.

Have some tissues ready when you read this one for the first time. Appropriate for ages 5-7.

Explore diversity in a variety of ways in this anthology for teens that offers fresh takes on life. The anthology includes work from thirteen young adult authors. Short stories, a one-act play and a graphic story are all part of the collection. The authors are some of the best writers at work today as you can see from the cover image above. The collection is rich in diversity and voices, featuring stories about race, coming out, death, spray paint and making your mark on the world.

Giles, who is cofounder of We Need Diverse Books, has edited this collection very well. The group of contributors is astounding, each new story shining with their skill and voice. The quality is exceptional and the range of stories leads you from one type of diversity to another, exploring finding your way in a world that stands against you.

Strong writing, great stories and a call to action will make this collection a popular one. Appropriate for ages 13-17.