This is another charmer of a picture book from Reynolds who wrote the popular Ish and The Dot.  Marisol considers herself an artist.  She paints lots of pictures, carries art supplies with her, and sees an artist in everyone.  So Marisol is thrilled when she learns that their next project will be a class mural.  Marisol wants to paint the sky.  The only problem is that there’s no blue paint.  How can she paint the sky without any blue?  Happily, the sky itself shows all of the colors possible to Marisol and she is inspired to paint the sky in many colors.

Reynolds uses simple text very successfully here, just as he has in his previous books.  This book is all about embracing the inner artist, expressing creativity, and finding inspiration in the world around you.  These are huge concepts that Reynolds makes tangible and possible even for young children to get inspired by.  A great idea would be to share the book with children and then have everyone paint the sky without using blue.

Reynolds successfully turns just a few lines into great illustrations that capture emotions and full characters.  Many of the pages are black and white with bursts of color, but when artistic inspiration strikes, the colors bloom.

Clever, colorful and filled with artistic inspiration for young readers.  Appropriate for ages 4-6. 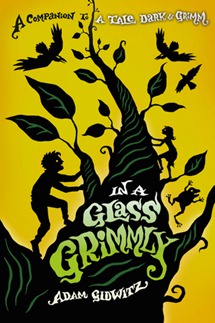 In a Glass Grimmly by Adam Gidwitz

A companion novel to A Tale Dark & Grimm, this book continues to celebrate the darkness and horror that is part of real fairy tales.  This time the focus expands beyond The Brothers Grimm to also include Hans Christian Andersen and Christina Rossetti among others as inspiration.  This is the story of Jack and Jill and their adventures.  Yes, there is a broken crown and also a beanstalk to climb.  There is also a talking frog to be kissed, a goblin market to explore, and monsters to either battle or befriend.  There is plenty of blood, anger, misery, hunger and torment too.  Sound like the sort of book you’d enjoy?  I thought so!

Gidwitz has continued with his narrator who warns readers about what is about to happen, most of the time.  There is a wonderful playfulness in this approach that lightens the sometimes very grim storylines.  The interwoven tales, some of them original and all of them slightly twisted, make for a great read.  The writing is strong and vibrant and a joy to read.

The characters of Jack and Jill are both wrestling with different issues, but both come down to the same thing.  The two of them need to focus more on what they themselves think and not about what others think of them.  Jill struggles with her mother’s focus on beauty, resulting in her walking the street naked in a spin on The Emperor’s Clothes.  Jack wishes he was a leader rather than a follower, and is tormented by the other boys.  He’s even mocked with a version of “Mary Had a Little Lamb.”  The two children start out very likeable and relatable but turn out to be true heroes in the end.

This engaging story and pair of books is one that will get reluctant readers reading with its promises of gore and disgusting content, but is will be most enjoyed by children familiar with the original tales.  Appropriate for ages 9-12.

Shadow & Bone, the amazing debut novel by Leigh Bardugo, has been optioned by DreamWorks Studio.  David Heyman, Harry Potter producer, will produce along with Jeffery Clifford.

“We found not just a fantastic story, but one set in a mystical and fascinating world that will translate well to the big screen,” said DreamWorks production president Holly Bario. “We are excited to begin adapting this book and look forward to working with David Heyman who has unparalleled proven success in this genre.”