This is an exceptional picture book that I’m not sure I will be able to explain well enough.  If I bungle this, just take my word for it that this is a book you want to get your hands on.  Told in a rollicking verse, this is the story of three cats: Lillian, Tilly and William J.   The three of them head out on some adventures that are driven by the words in the lines.  I think it will work best if I just pull a few of the early verses:

They pack some books and kitty chews.

They choose a spot.

They spot some ewes.

They use a box to hide from bees.

And so it goes on, each line pulling the last word from the line before to create a new situation.  But even better, these are homophones rather than the exact same word.  Best of all, the story is fun and engaging.  This is word play at its best.

Hall has also created engaging artwork to go along with his playful verse.  Done in bright colors and big shapes, the art has an appealing texture.  Created from acrylic paint and paper cut outs that were combined digitally, it is eye-catching and cheerful.

Bravo for a book that invites children to look closely at the words they are reading and just may be the best way ever to introduce homophones to children.  Appropriate for a variety of ages.  Younger children will enjoy the art and verse while slightly older children will understand the word play best. 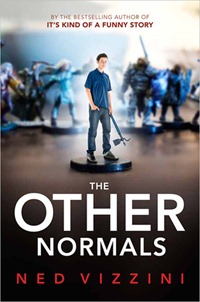 The Other Normals by Ned Vizzini

Perry Eckert loves to play Creatures & Caverns in all of his spare time.  He doesn’t have any friends to play the game with, so he just creates characters.  When someone inspires him to create a character based on himself, he does.  Of course the character differs in some ways, like his red skin, yellow hair and tail, but he is also not that strong, not that fast, but full of honor.  Perry’s parents are worried about him being a social outcast, so they send him to summer camp.  There, Perry is swept into a world where Creatures & Caverns is real!  Even better, they need Perry to help them save their world.  All it will take is Perry kissing the most popular girl at camp.  No pressure.

Vizzini is a master of misfit characters.  He takes Perry and throughout the book reveals much more about him than just his geeky exterior.  Instead, we all discover that Perry is a true hero, filled with honor, who is intelligent and very brave.  Vizzini throws in realizations that Perry has about modern American life, about thinking too much and acting too little, that will resonate with readers.

Vizzini does not shy away from swear words in critical places.  There is also some nudity (on the part of Perry) but I won’t ruin those parts for you.  Vizzini brings lots of humor to the story, enough to bring out big guffaws of laughter at times.  There is also plenty of adventure, some death, enormous monsters, and everything that D&D players would want in a book.

Get this into the hands of kids you know who game.  They will enjoy not only the game brought to life idea, but also the winning hero at the heart of a great adventure.  Appropriate for ages 15-17.

Reviewed from ARC received from HarperCollins.