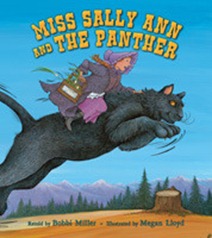 Miss Sally Ann has had many great adventures, but one of the tallest tales about her is the story of when she met Fireeyes.  Fireeyes was a panther, huge and black.  When the two of them saw each other in the deep forest, they both wanted each other’s fur.  Miss Sally Ann thought that Fireeyes’ hide would keep her toes nice and warm.  Fireeyes wanted the bear-fur coat that she was wearing to keep his shoulders warm.  After gazing eye-to-eye, the two of them began to fight.  It was an epic battle, and I won’t spoil the ending or the middle of the book for you.  Just know that this is one wild tale about a tremendous woman and a blazing panther.

Miller’s writing here is, as she would put it, “ripsnorting fine.”  She peppers and spices her prose with words that can only be read with a twang and a great deal of swagger.  Just try saying “thunderferous” or “terrifiacious” without a big grin leaping to the your lips.  It all makes this book not only a great tall tale about an amazing woman, but also a “thunderific” book to share aloud.  The pacing is wild and wonderful, the battle is beyond epic, and the result is pure comfort too.

Lloyd’s illustrations really bring the larger-than-life characters full to realization.  From the huge size of Fireeyes to the great joy and fun that Miss Sally Ann has about life, the two of them shine on these pages.  Their battle is captured, full of motion and stunning action.

This is one great read to share with children learning about tall tales.  Not only does it feature a woman, but it’s also a treat to read aloud.  I’d also sneak it into any story time about cats just to get some big energy in there.  Appropriate for ages 4-6.

Why games are valuable to help kids engage and learn. http://lnkd.in/SZyeSf

"If you have to pay for a good review, you shouldn’t be a writer. " http://bit.ly/QUmhcq