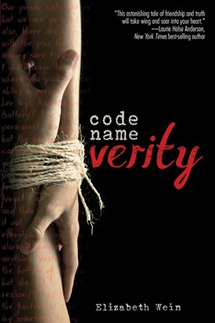 Verity has been captured by the Gestapo, who have tortured her and kept her without sleep for weeks.  Now she has agreed to tell them the truth, but as a British spy during World War II, that means putting many others in danger.  Still, it gets the torture to stop, and there are many ways to be truthful.  As Verity puts pen to paper, she tells the story of the friendship between two girls, Maddie and Queenie, who would never have met during peacetime, much less become best friends.  Maddie’s story is that of becoming a female pilot when there are very few.  It is a story of strong skills, good luck, and great mentors.  Along the way, she met Queenie, another strong girl, who spoke German, bluffed naturally, and loved fiercely.  This friendship is the heart of Verity’s story of truth, one written with details that are lingered over as if they transport her somewhere safe.  It is also the story that will keep her alive one more day, but eventually the story must end.

Wein is purely masterful here.  While I caught certain things in the story that pointed me to the right conclusions, much of it is so cat and mouse that it is a real pleasure to puzzle through.  That said, it is also a great story all on its own without the puzzle, something that is incredibly difficult to do.  Wein populates her story with so many strong women.  There are Maddie and Queenie, either of whom would have been heroine enough to carry their own book.  Yet there is the magic of having their stories told intertwined.  There are the other women who risked their lives against Hitler, women who defied by seeming to capitulate, women who fought with all their had.  It is the story of all of those women too.

Throughout the book there is an ache that will not go away.  That is the ache of Verity and her story of torture.  Every detail is rimmed with sorrow, with never seeing it again, with the knowledge that her days are so few.  This creates a fragility, a solid sadness, that is present throughout.  It is the world of war, the desperation and the death, and it lifts this book to another level that is beyond the pain.

Tremendously beautiful, achingly sad, and beyond brave, this book and these heroines are simply and utterly amazing.  This is a must-read book, one that I hope garners awards, one that will be a delight to share with others.  Oh, and I must mention that it’s a great crossover for adult readers too.  Trust me, get your hands on this one!